“Mom! You have to come see this! There’s a bunny leg that looks dead outside in the yard!”

FINE. Reluctantly I step into the yard to see what has my children, as well as the gaggle of neighborhood kids all huddled around my empty flower bed.  Some already have sticks in hand to do what kids do best – poke dead things.

NO ONE TOUCH THAT THING!! 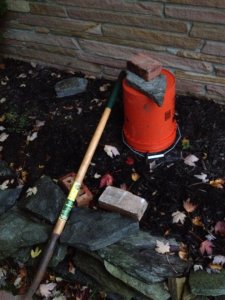 Yes folks, I had in my mulch just under my bedroom window a completely disemboweled, decapitated squirrel. OK, it turned out to be a bunny, but hey, without a head, it’s difficult to identify. Either way – disgusting.

The thing had died a horrible death. I can’t see a head, maybe it’s tucked up underneath the body. The stomach had been ripped open, with a circular brown organ sitting neatly beside it, as if it’s carnivorous attacker couldn’t stomach it. Seriously, I was waiting for Hannibal Lector to walk around the corner with a nice Chianti and a side of fava beans.

I shooed the kids away, but they were like moths to a flame. One ran to get his mom, as if I had decimated the thing personally and she was the only one who could resuscitate it. G wanted to know why the bunny had to die like that. It’s nature sweetie, some things eat other things. Give me a second to figure out how to explain the food chain to you AFTER I deal with its latest casualty. One kid took sentry up next to it in an effort to dissuade the other kids away with a fully loaded Nerf gun. There was no moving this kid, he was the lookout and that was that. I let him be as I stared at the disgustingness trying to figure out how to handle this.

Ah what the hell, daylight was fading, I was tired. Let’s go find something of Mark’s in the garage to cover it with. Ah Ha! 1 nice empty orange paint bucket will work nicely as I procrastinate one more thing I don’t want to do. So, much to the entire neighborhood’s disappointment, I gently covered the carcass with the bucket and placed a stone overtop so wind, animals or human animals did not knock it over “accidentally.” I kicked everyone out for the evening, went inside and locked the door, fully intending on leaving it for Mark to deal with Saturday morning. Three days later.

The next day, I hemmed and hawed about whether to “man” up and take care of it or leave it to my husband, because you know, I’m just a girl, I’m dainty and frail, and frankly, it’s icky.

Crap. I have to take care of it. What if the neighbor kids touch it, get rabies and die? Hello lawsuit.  Also, what if its young came a hoppin along only to discover its mother brutally murdered and covered with little to no care? Nope, this family has lived through enough as it is. OR what if its sadistic murderer comes back to rip off some legs too? Then I would have even more mess scattered throughout the yard, which would lead to more rabid kids and distraught bunny offspring and grieving bunny husbands. So, I put the kids in front of the TV, suited up and decided to tackle this thing on my own.

With light fading fast, I grabbed the spade shovel out of the shed and walked around to stare at the bucket.

Yes I can. People in the country do this all the time.

F you. I live in the CITY for a reason. Plus it’s super dark in the country and you know that’s where murderers lie in wait for their next victims.

OK, calm down….What if I knock the bucket over and something springs up at me? What if it stinks? Do I bury it or throw it out?

After some more staring and Facebook mea culpas, I decided on throwing it in a trash bin (with a bag in it), since burying it was a lot of work, and let’s face it, I didn’t know this bunny. I knocked the bucket over with the shovel and jumped out of the way like it was Frankenstein’s bunny come back to life to eat/kill me for locking it in a bucket for 24 hours. No such luck. Still deader than a doornail.

I took a deep breath, looked pleadingly across the street at the neighbor who is ALWAYS out manicuring her lawn, as if willing her to help me, and dug in. I got a good load of dirt from under it so I couldn’t feel it’s body and dumped it into the waiting trash can. I then proceeded to get the heeby jeebies for the next minute or so (Still no neighborly love coming my way. She’s probably mad at me because every fall I stare out my front window at them tractor vacuuming their leaves up until their yard is spotless, trying to use The Force to will her husband over to my pitiful yard, but alas, never have they come over.).

Once the shakes stopped, I realized this bunny had no head. Wait, isn’t there a rhyme that goes with this?

Fuzzy bunny wasn’t so fuzzy was he?

No? Not ringing a bell? K. Nevermind.

Then I freak out. WHERE IS THE FREAKIN HEAD? Is there a falcon or hawk somewhere with a trophy nest of bunny/squirrel heads? Does some ‘roided out cat have its head as a necklace to warn all other neighborhood wildlife that it’s not fuckin around? Crap! What if it’s still in the yard somewhere? What kind of creature rips heads off animals?

Jesus, Mary and Joseph. As you can see, I am a city girl at heart. For some of you, this probably happens with some regularity, but for me, this was a extraordinary experience. I am forever scarred. I will always be on the hunt for your killer, Fuzzy Bunny. I WILL NOT FORGET.

One thought on “Guess Who’s Coming to Dinner”