So, Disney. We took our first trip at the beginning of December and there is so much to tell you, I have been sitting on it for a month.  I have quite a few Disney junkie friends and don’t want to offend, but I also want to give an honest take from a self-diagnosed introvert with anxiety issues, a deep discomfort with large crowds and spending $7 on a Coke.

Before I get started, I will bookend our trip with some of my favorite pics.  First: 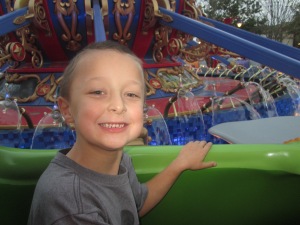 This was pretty much the look on their faces for 7 days.  They were thrilled to be there.  They were troopers.

We didn’t get a stroller to avoid this…

…so they hoofed it around 4 parks for 5 days.   They didn’t become crazy gotta-have-it kids either.  They had some money and got what they wanted and sometimes had to be patient to get it.  But get it they did…

Do you have any idea how hard it is to pack a Mickey Mouse Fantasia light saber to return home?  We carried that thing from Orlando to Detroit.  Totally normal in Orlando.  In Detroit, kinda weird.

As a side note, Disney is marketing genius.  From the time you step foot in Orlando, you are transported into this magical bubble where it’s all things Disney.  You begin to feel weird for not having a pair of mouse ears on your head.  You feel out of place if you are wearing a shirt without a character on it.  I can’t believe I packed normal clothes.  You totally look out of place when you do.  And when you come back to normal land, you are a little weirded out that no one is wearing mouse ears or carrying a Mickey tote bag/lunch box/purse/backpack/body bag.

The crowds were heavier than what we were anticipating, but not as bad as I think it could have been.  For me however, there were TOO MANY FREAKIN PEOPLE.  People watching was A-may-zing, but that’s exactly what I want to do, watch…not interact.

We of course had lunch at the Royal Table in Cinderella’s Castle, where, for the only time during the trip, we became these parents:  “You will get pictures with these damn princesses and eat your $30 chicken nuggets and LIKE IT!!  We didn’t spend $250 for you to sit and stare at them!!!”  And photos we got.  Nevermind the fact we were caught off guard and didn’t have time to run a comb through our poor girl’s hair.

For the record, Bear would not be photographed with the Princesses.  He’s not so into the ladies.  Doesn’t G look thrilled?  Then we got a pic with Cindy herself.

…but she was on a ciggy break, so we took a pic with her crotchless pantied knight instead.

PSYCH!  ha ha.  OK, we really did meet her and I do have a pic EXACTLY like the ones above of her and Cinderella, but it’s an actual PHOTO and ain’t nobody got time to scan that!

We introduced them to all forms of mass transit.  First up, the plane ride, for which they were seriously geeked.

Until we started our descent and Will got airsick and passed out.  Cold.  Don’t worry, on the way home, he just threw up and got almost all of it in the vomit bag. 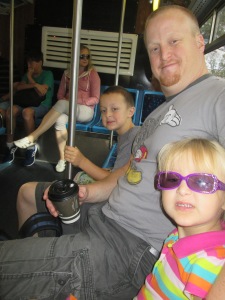 Always in the back.  Always.  Not a good sign.  Back of the bus kids are trouble I tell ya.   Damn youths.

And of course, Dad.

We did shows.  Some were great, some were like meh. Like the Tiki Lounge, which I am told is nostalgic, but really more of an air conditioned place to sit down for a few minutes while some animatronic birds do schtick above you.

We were in a show, only because they had the $25 light up ears they were hawking, and a certain Disney junkie traveling companion for the day DID NOT tell us if you sit in the front rows during Fantasmic, you get REALLY REALLY wet and spend the whole show wiping mist out of your eyes. 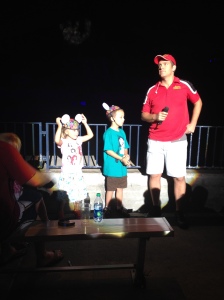 I just noticed, look at the lady behind us.  How can you be so blasé on the Dumbo ride?!  She looks like, “I am SO OVER this.”

I wish I had pics of us on the bigger roller coasters, but I was too busy holding onto my kid for dear life, you know, cause they could totally fall out.

But, by far, the most exciting ride…the FastPass machines!! 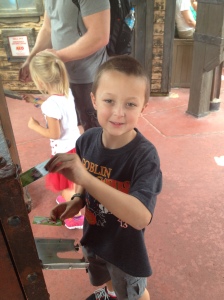 These are apparently a thing of the past.  We almost never got to experience the magic of booking it to these machines only to find out they were done for the day or not available until 9 p.m. that night.  If you did get one, which we did a few of them (you tend to get less if you are one of the few crazy people who SLEEP IN while on vacation at Disney), they were awesome.  Remember that scene in Wayne’s World where they had the backstage passes and kept flashing them at everyone?  Well, if not, go see it.  Good movie.  Classic for a 90s teenager.  Anywho, that’s how I felt when we got to bypass all the schmucks in the hour long line.  SUCKAS!  I guess now they all have wristbands that you can go online at the hotel and essentially schedule your time to ride the rides (AHEM Cedar Point!!).  We didn’t have one of these because we were GASP!  offsite hotel vacationers and didn’t get one, so I don’t know much about them other then that sometimes it felt like we were traveling in steerage and not allowed in the fancy parts of Disney.

Another sad moment.  We lost a dear friend.  His name was Balloony.  He was a $10 balloon that wasn’t tied tightly enough to his string.  It was a sad moment in the Magic Kingdom.  And no, we didn’t replace him.  It was $10 freakin dollars.  Every time we saw a balloon vendor walk by, we quickly diverted her attention.  Ah, strategery.

We stayed one night for the parade.  It was cool.  We had some fun waiting for it.

Then I said forget this, I have full lives in Candy Crush!

Then it came on and was pretty dang cool.

We paid a gazillion dollars for character lunches. 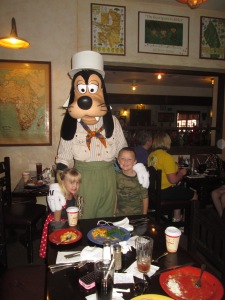 Donald was outside sweating his balls off for a very special photo op.  That guy always gets the short end of the stick.

We had good food.

The best restaurant had a baby with a leaf on his junk, which is apparently HILarious.

I attempted to take a Christmas card photo. 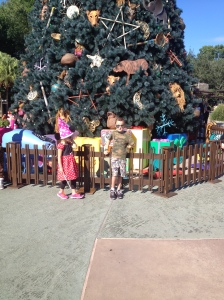 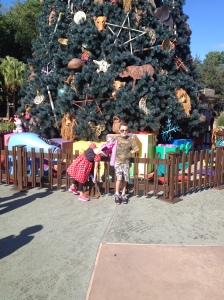 We almost got an eye poked out on Phineas’s nose.

Basically, we had a good time.  It was exhausting.  Really, you should train for 5 days at Disney.  We were not physically prepared for the strenuousness of it.  Overall though, we had a pretty freakin good time. 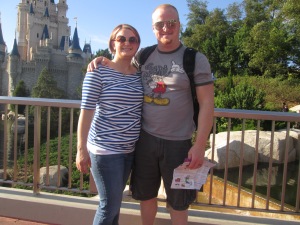 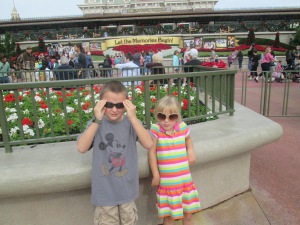