So…I took Friday off. If you read my last post, you’ll know why. Yes, I know I won’t always be able to buffer my kids from hard spots in life, but this time I could. After the miracle surgery on G last August, (tonsils and adenoids) we have weathered this winter and early spring with very little illness (knock on wood). A few days for the prerequisite strep throat and a quickly contained stomach bug (it only hit Bear) made up some of the few sick days I have had to take this year.  Therefore, for the first time is 3+ years, I got to take a day off.  It was awesome.

We hit the town kiddie style.   We went to Imagination Station (think COSI out of towners) to see the Titanic exhibit.  It was PACKED.  Apparently, I wasn’t the only one who had this genius rainy day idea.  The kids humored me and $50 later the three of us were traveling through my favorite historical subject.  It was great, but not so great with a 5 and 7 year old.  It was A LOT of reading.  Maybe the walking audio tour would have been cool, but my G wouldn’t have listened anyways.  Bear and I would have, but it would have been a constant whirling around looking for G, who most likely would have wandered into the 3rd class cabin exhibit and proceeded to have jumped on the top bunk.  Plus they were $5 a pop extra and after $50 just to get in the door, I was maxed out.  So basically we spent $50 (have I mentioned this enough) to quickly buzz by some portholes and plates in the sand.  Oh well, it is across the street from my job, so I guess I could just sneak over there by myself.  Maybe if I give them the sad-mommy-wanted-to-see-it-but-the-kids-wouldn’t-let-her look convincingly, they’ll let me in free for another quick peek.  Yeah, probably not.

Who wouldn’t want to spend time with them?

Look at us in the dirty parking garage elevator! Don’t step in the pee!

Anyways, this whole day off got me thinking.  How can I make money aside from an 8 to 5 job?  How can I do this everyday?  How can I get someone or something to pay me to only do the stuff I want to do?  Can you even get paid for sleeping on the couch?  Or maybe there is a lucrative market for binge watching Netflix watchers?

I don’t necessarily want to relive that Friday every day.  I loved spending time with my kids, but places like Imagination Station make this introverted, anxiety queen a big ball of nerves and tense muscles.  Literally.  Every single time we go there, I have to go home take 2 Advil, a Xanax and take a nap.  It is just way too much interaction with strangers and germy kids for me.  I love the idea of getting kids interested in science and whatnot, but I don’t want to do it constructing a bunch of germy blocks that I just watched some 3 year old sneeze on before our turn.  It’s just stressful.  Too much pandemonium.  Too little line queues.  I need strict time limits and cattle prodding.  I can’t let the people in front of me have 20 minutes at the paper airplane table without losing my mind a bit.  I hate having to apologize to people behind me because my daughter really wants to figure out how the robot hand works.  I just can’t handle trying to be polite while at the same time trying to get my kids to enjoy themselves and learn something to earn our $50 worth of tickets. (You had to buy general admission and THEN a Titanic exhibit ticket to get in to the exhibit, so we were going to take full advantage, even if mommy did have a nervous breakdown at the water/sand table.)

One day…maybe. Except she was like, “Mom! I’m a space walker with a purple bow!” So she’ll be a wickedly accessorized astronaut.

Breathe lady. Breathe. You have hand sanitizer in the car.

Anyway, I am digressing as usual.  I need to figure out a way to get paid doing this writing gig.  I am not sure I am good at it.  I am not a super grammar Nazi.  I make a lot of errors and end a lot of my sentences in a preposition at.  I just like doing it.  However, unlike most bloggers, I don’t really make the internet a better place.  I don’t cook (Kraft mac and cheese recipe anyone?).  I don’t sew (Just ask my 7th grade home ec teacher).  I don’t craft (If I can’t buy it, I don’t have it).  I don’t clean (Want me to write about someone else doing it?).  I don’t organize (I want to.  Badly. But House of Cards isn’t going to watch itself).  I basically have no talents, except the occasional joke that makes other moms and wives feel like maybe they aren’t the worst there is.

Maybe I could write about doing hair? HA! 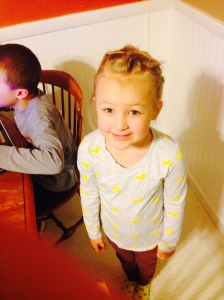 Seriously. I am REALLY good at it.

I’d love to say I have the next great American novel spinning around in my head, but I don’t.  I don’t have any Edwards, Bellas, Katnisses, Peetas, Trises or Fours (sigh Tobias, I love you) yelling inside my head wanting to get their stories told.  I am strictly a truth teller.  Seriously, everything I have written happened.  To me.  I just don’t have time to imagine other lives that are actually interesting.  My mundane, every day plain Jane life is overwhelming most days, let alone if I met a factionless vampire from District 13.

Help me people.  Tell me how to make money on this.  Tell me who will listen to me spout off randomly, pay me something and offer me freakin great health coverage?  Said persons must take into account I like to sleep in, watch Kelly and Michael, drop and pick up my kids from school and workout every day.  (Ha, ha.  That last one was wishful thinking.  In reality, I’m pretty sure I’d just spend time driving around town trying to find the last of the Girl Scouts hawking their addictive cookies.)

Goodnight.  See you tomorrow, where someone will have a case of the Mondays.

If I stayed home, I could get this poor kid a dog. 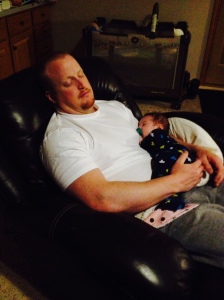 And…this one… No reason. Just makes me happy. (Babysitting our niece and nephews.)