So my best friend finally got married.  I’ve wanted to write about the experience for over a month now, but couldn’t quite make up my mind on the tone I wanted to prevail throughout the post.  Balls to the wall political rant? Sweet, sappy version?  Or through my most comfortable form of communication…humor and self-embarrassment?

Me and my handsome best friend.

Naturally, I choose the last option.  For those of you not lucky enough to be invited to a gay fall wedding, here’s an inside peek.

Attendees came from all walks of life.  Some wearing their finest leather assless chaps. Some decked out in bedazzled sequins and feather boas.  Some with not many clothes at all.  The grooms shashayed down the aisle while Voguing in their rainbow suits.  Disco balls and club lights flashed the crowds as they recited showtune quotes for vows.   The ceremony concluded with groping and sloppy kisses while It’s Raining Men played riotously in the background.  White doves were released and condoms were shot out of a canon.  After the ceremony the guests lubed up appropriately and jumped into the big ole gay orgy pile.

Sound about what you’d expect?

Nah.  Clearly none of that happened.  Although sometimes I think that’s what some of my coworkers think I attended.    What I did get to be a part of and experience was nothing short of beautiful.  What it really was was an elegant, picturesque ceremony atop a swank hotel overlooking the Bay Bridge of San Francisco.  Not a dry eye in the house as two of my favorite men on the planet exchanged heartfelt vows after waiting a decade to commit their lives together officially.   Family and friends surrounded them for a delightful dinner followed by an epic reception, where toasts and well wishes abounded.  Wine flowed freely while we danced the night away to a meticulously planned (and awesome) playlist of music.  Cake was phenomenal.   Best of all was my best friend’s dad, who like most dads on their kids’ wedding days, became quite sentimental and stood up and stole the show with a touching toast on how proud and happy he was for his son and his new son-in-law.

I had the privilege of reading a wonderful poem by Walt Whitman and the even better privilege of being an official witness to the nuptials.  It was a wonderful heartfelt day, painstakingly planned down to last detail as most couples do to ensure one of the most important days of their lives is remembered fondly. 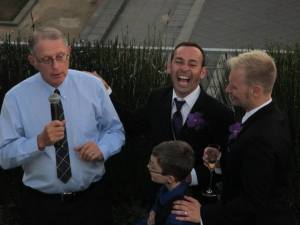 This moment delightfully brought to you by Journey.

But alas, it would not truly be a story of my own if I did not in some way humiliate myself and bring up some form of bathroom humor.   Now, if you’ve ever seen the SNL Gay Summer Wedding Xanax spoof, you’ll have some idea of the pressure I was under to look fabulous for this wedding.  Too bad I had hopped off the diet wagon a full month earlier and was a bit disappointed the Spanx I chose did not completely transform my curves into the likes of Kim Kardashian.    The Spanx, although $40, did not quite squeeze my baby food belly around to plump up my ass, nor did it hoist the girls back up to their original pre-children spots.

Dammit.   Oh well, I was just happy to be a part of the whole experience.  No one was looking at me anyways.

Then, due to a forgetful photographer, my boys were late to dinner.  Which meant my wine glass kept getting topped off on an empty stomach, and before I knew it, I was three sheets to the wind.   And I had to pee.  Sort of dizzy and light headed, I stumbled down a flight of stairs to the ladies loo.

Now girls, we all know Spanx are not the easiest to get off for a quick pee right?  And this one piece do-joby clasped at the crotch.  Joy.  Not easy to undo when sober, let alone 3+ drinks in.  I had a genius idea, which I’ve accomplished before many times with swimsuits and said Spanx accoutrements that I proceeded to try once again.  Just pull my undies and that fat grasping apparatus aside, hold it, pee quick, wipe and done!  Thorough hand washing and I would be good to go.

Not so much.  About halfway through I realized something was amiss.  My tush started to feel wet.  OH MY GOD, in my drunken state, I couldn’t feel my panties and didn’t pull them aside with the Spanx!!!!  I was peeing right through my underwear.  With a loud, “SHIT!”  I went into emergency planning mode.  Dress was clear of wetness, thank God, but undies and Spanx were soaked.  I was alone, no phone, no purse, no girlfiends to call because hello! I was at a GAY wedding.  Lots of men, most of whom are already extremely uncomfortable with girl parts, let alone ones in peril.  I had to think fast.  Undies gone, natch.  I’ll just wear the Spanx, that’s fine.  SHIT.  Spanx soaked up the back.  The whole apparatus had to go.  Off comes the dress, then the spanx, then the underwear.  I started to throw the underwear away, a causality of war, but then I realized I had nowhere to put the Spanx.  This puppy was $40 freakin dollars!!!  No freakin way was I going to throw this thing away to save myself a few moments of embarrassment.  I have given birth for God’s sake!  This is nothing on the humiliation scale of my life.

So I wadded up my wet undergarments into a paper towel and tried to make it fist size without much luck.  I escaped the bathroom and had to walk down the side of a bar full of patrons into our private room, where not a few eyes glanced toward the conspicuous wad in my hand.  I quickly threw it into my purse as my husband exclaimed loudly, “Hey, what’s that in your hand?”  SHHHH!  Not now!  LATER!

I then got to spend a still awesome night surrounded by wonderful men (and some lovely chicks too I might add) who would have been totally skeeved out their #1 fan was without her britches and complete with nothing but the sheer will of God keeping my stomach sucked into a dress that really could have used some girdling power.

So there you have it.  A wonderful wedding, turned into a story all about me and peeing my pants!  It has to be embarrassing or I clearly wasn’t there.   It was a wonderful night, a wonderful trip and a true joy to see my best friend marry his perfect match in life.  And just over a month later, they are still married, so already they are beating many straight marriage success rates.

Love you both.  Congrats Jay and Desi!

And now, if you need tips on attending a gay wedding, I give you expert advice by Key & Peele.